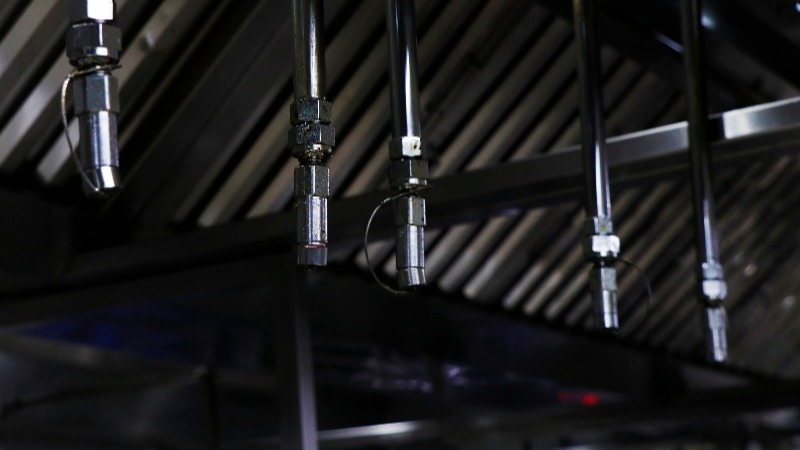 Kitchen fires are dangerous and quickly get out of control. Fire requires the presence of three things to survive: fuel, oxygen, and heat. In kitchen fires, the fuel is almost always fat, grease, or oil which are highly flammable hot, and spread quickly, particularly if you dump water on them. For this reason, kitchens require a specialized fire suppression system to detect and extinguish fire.

So, how exactly does a kitchen hood fire suppression system work?

Similarly to fire sprinkler systems, these fire suppression systems get activated when they detect fire or excessive heat. However, they can also be manually activated in case they do not sense the heat of a fire early enough.

When activated, the kitchen hood suppression system discharges chemical agents through the nozzles instead of water. The chemical agent is a specially formulated extinguishant that suppresses fire and prevents re-ignition through saponification—a process where the agent combines with the grease to create a soapy layer that seals off the fuel from the oxygen.

The fire suppression system will also shut off the gas control valve to starve the fire of its fuel or prevent it from accessing an additional fuel source. It will also cut off power to the appliances to prevent sparking and eliminate shock hazards.

Once the fire is out, fans in the kitchen hood will activate and work to remove smoke from the kitchen.

The primary reason kitchen fires should not be put out with your standard dry chemical fire extinguisher is the high temperatures at which oil and grease burn. As such, you need a K-1 extinguishant that will reduce the temperature of the fire to prevent a reflash.

Kitchen fire hood suppression systems are designed for use in commercial or industrial kitchens to prevent fires. They're specially designed to put out fires without ruining kitchen equipment, food, and produce.

It’s considerably less expensive to prevent kitchen fires than to repair the structural damage of one. The damage caused by a kitchen fire can cost a fortune to repair—not to mention the risk of injury to patrons. Kitchen hood fire suppression systems restrict fire damage to an individual cooking surface as they’re made to keep a fire from getting out of control.

What’s more, you don’t have to shut down your kitchen after a fire. Workers can quickly and easily clean up after an incident since only one station and the food in it gets affected.

Before installing just any fire suppression system, it’s important to discuss your options with a fire safety professional. For one, these fire systems must legally comply with local fire codes and must be tailored to your kitchen.

Bring in the Experts

Whether you're in need of a kitchen hood suppression system or automatic sprinklers, Brothers Fire & Security has got you covered. We've got the expertise to provide excellent work every time.